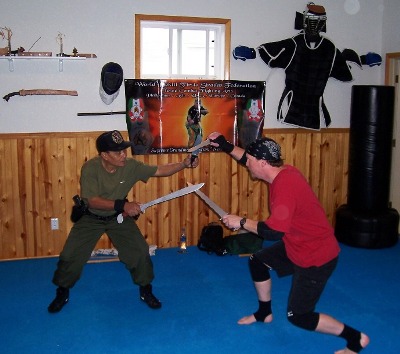 Dekiti Tirsia Siradas is an ancient, authentic and unadulterated Filipino martial art indigenous from the island of Negros in the Visayan Region of the Philippines. This fighting art is very combative with emphasis on stick and bladed weapons as well as empty hand techniques and even firearms. It has been proven effective many times in actual combat particularly during World War II.
At present it is used by many law enforcement and military agencies such as the NYPD, (JUSMAG) Joint United States Military Assistance Group of the U.S. Embassy in Manila and the Philippine Army Counter Intelligence.

The name of the system came from three words from the Illongo dialect.

Dekiti translated into the Tagalog dialect is “malapit” of “dekit”. In English it means very close or near. Its emphasis is on close quarter fighting in which you cornered the opponent in an area, to close and devastate him.
Tirsia means “gua sa wala” or “sa tuo” or quartering in fighting, “pasulod”. It means to push the enemy to a corner or an area with a three-corner side preventing him to escape or run away from multiple deadly blows or thrusts.
Siradas means to stop your opponent from getting in or out, for the opponent not to be able to penetrate in on any angle of attack.

Come train with us this Saturday, August 11th at the Las Vegas Martial Arts Academy!

Brian R. VanCise
Note: This blog is opinion only and neither Instinctive Response Training LLC or Brian R. VanCise are responsible for any third party actions.