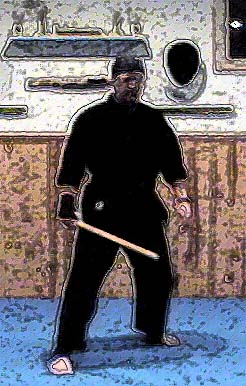 Okay due to some Modern Arnis Videos I posted I have been asked several times lately why the stick work in IRT has a similar yet different flair than how Modern Arnis practitioners move.  First the movement (ie. footwork) by the older Modern Arnis practitioner’s is more dynamic than what you see from what I would call the fourth generation.  (the first MA generation of practitioner’s taught in the Philippines, 2nd generation taught in America and Europe, 3rd  generation taught in America and Europe (where I fit but close to 2nd), 4th last group taught before the Professor passed the last ten years or so)  The first, second and third generation footwork was in my opinion more fluid than the fourth generation’s.  You can see this in the 1st generation Filipino Masters and in early Modern Arnis pioneers like Kelly Worden and Dan Anderson to name a few.  There footwork is fantastic!  In my opinion the last generation Modern Arnis practitioner’s became a little too upright and moved less as they mimicked an older Professor Presas. (I have seen this in another system that I am personally involved with as well, young men moving like an older man because they missed a period and the Teaching Window was closing)  So that is one difference.  Also the introduction of Tapi Tapi at the later stages added to the footwork issues as I see it. (Tapi Tapi being a close in counter stick fighting system to Balintawak and the Professor’s last great achievement)   The next and the biggest difference is that over time I moved away from seeing the stick as a stick and more as a potential blade substitute training aid.  IRT is an edged oriented system.  As soon as you do this you take away quite a few things as you can no longer grab a stick if it is mimicking a blade.  So in our IRT 1,2,3,4,6, 10 count and beyond there is little to no stick grabbing and stick related disarms.  I have taught a lot of stick disarms in the past and will do so in the future just not as heavily as if you were training in Modern Arnis or a heavily oriented stick system like Balintawak.  I see it in IRT as a minor subsystem. (ie. stick grabbing)  My reason is pretty simple in that I do not want to over train the idea of grabbing a stick, this is some thing that I feel can hurt a martial practitioner in the moment. Particularly if they make a mistake and grab a blade.  In IRT we want to be able to deal with stick attacks and have to have the ability to see the difference between how a stick moves and how a blade moves.  Yet, if our game always relies on grabbing the stick this could be an issue when dealing with bladed attacks. (You fight the way you train as the old saying goes)  One of the other key developmental phases in IRT had to do with training in the close quarter blade system of Dekiti Tirsia Siradas with Grand Tuhon Nene Tortal.  The influence of Dekiti Tirsia Siradas was instrumental in the move to a more blade oriented approach and the Grand Tuhon is amazing and his teachings were very important to my own development as a martial practitioner.  They had a significant impact in our training!  So while I still teach some stick disarms I definitely do not teach them like I used to and I also show how to do them without potentially sacrificing a hand by placing it in an edged meat grinder.  Just some explanation on the differences and why IRT stick/blade work has it’s own unique flair.

I would add that through the years I have had the opportunity to train with a lot of great martial practitioners in the South East Asian Martial Arts that also helped along with this progression some notable ones were:

I should add that the Japanese bladed systems also permeate in IRT and also have a distinct impression upon how we do things. No martial practitioners that I know of understand edge awareness like the Japanese and how to protect that edge they have very formidable blade systems.  From Budo Taijutsu to other systems there are a number of instructors that I have learned along the way and their teachings have also been instrumental.  Some of the prominent ones are:

The above is a small list (I apologize if I left someone off) but each one of them was important for their contributions and teachings.  There are a lot more and I know I have forgotten to mention a few.  My apologies…

I hope this answers some of those questions……