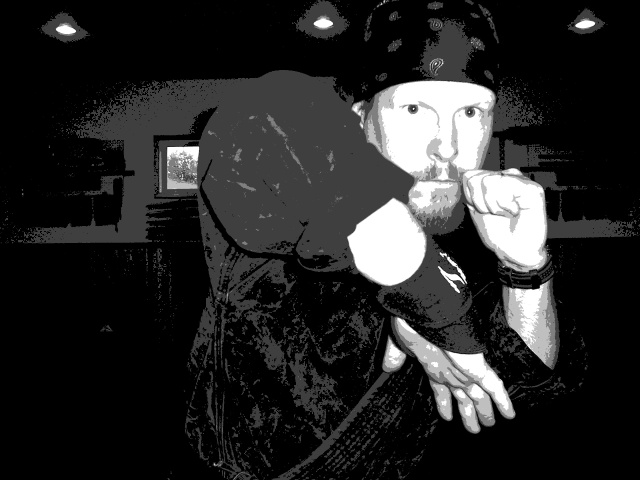 The other day I was in a conversation with a good friend who commented: how does an IRT practitioner blend all of the diverse nature of the Martial Sciences that you study.  He is coming from a karate background where his only other exposure to the Martial Arts was a bit of Judo in College.  So he has not really done much in the way of weapons/tools, trapping and locking (only rudimentary) or grappling.  What I have shown him in regards to weapons he has had a hard time integrating it.  The footwork and movement are different from his base of Karate so that is an issue with him.

I can recall going through a metamorphosis of a sorts myself.  My two base systems initially were Tae Kwon Do and Modern Arnis. (though I was also exposed to kickboxing and Inosanto Blend Kali at the same time)  While I did all of the things in Modern Arnis my background was the hard style movement of the old ITF Tae Kwon Do system. (a Shotokan Karate derivative) About ten years into this I started to have severe doubts about the body mechanics utilized in ITF Tae Kwon Do so I had a slow metamorphosis into the movement that I currently have.  I kind’ve let the hard style movement that I used in Tae Kwon Do forms just go.  Slowly I imprinted the Filipino body movement this was aided by really exploring the Filipino Martial Systems of Arnis, Eskrima, Kali, Kuntaw and the Indonesian systems of Silat and Kuntao.  At almost the same time I also began studying Budo Taijutsu which furthered to help in refining and programming the movement that I currently have and share with other IRT practitioners.  At roughly the same time learning Budo Taijutsu I moved into BJJ with a passion and fortunately that system and movement blends nicely with other movement.

The end result of the structure of IRT movement came about when I created the 1-19 Striking Technique.  This helped solidify the footwork with the 1-19 strikes.  There is of course several footwork movements from Open and Across to Across and Open to Removing Step and Swing Step and two more which I have never revealed.  In a typical IRT class we start with a warm up, 1-19 Striking Techniques, Weapons/tools, Kicking, Hand Strikes, Trapping Hands and Joint Manipulation and finally Grappling.  Then in a group class we also of course end with meditation.  Once an IRT practitioner gets into this routine and slowly develops their skill over time the movement from the ranges of long, medium, short to standing or grappling easily becomes natural and the practitioner over time imprints this and creates their own way of moving.

In IRT we do not try to turn out clones.  Instead each individual practitioner has the opportunity to move the way that is most effective for them based on their physical and mental characteristics and attributes.  Prior or past training is also an influence.  The IRT movement is flexible.  The structure allows for the practitioner to grow and expand their skill set and make the system their own.  This has in time shown to help individuals structure and creates an overall atmosphere of intense growth!  It also allows a practitioner to have great fundamentals and in turn allows them to practice and or attend seminars or training in different systems and not feel out-of-place.  I personally enjoy training in other systems and do not feel out-of-place whether I am training in Silat, Kuntaw, Filipino Martial Arts, Brazilian Jiujitsu, Mauy Thai, etc.  Due to the IRT Structure I feel at home in the Martial Sciences.  Irregardless of what I am practicing.

Here is an article written by another IRT practitioner talking about his experience: Mike Hammer’s IRT experience .  Now learning the IRT Structure is not easy.  It takes awhile and you have to want it.  I have had people say they were so close to leaving because it was so different and plain out difficult and hard.  However, those individuals who stuck with it became fantastic martial practitioners who feel at home in the Martial Sciences and also feel really capable in defending themselves and  their loved ones.  For my friend I hope that this is as good an explanation as I gave in person and gives you and everyone who follows the blog some insight!

Hi my name is Brian R. VanCise and my passion is the Martial Sciences. I have trained almost my entire life in the pursuit of martial excellence and I teach a world class curriculum in Las Vegas, Nevada. Contact us at: 702-326-3622
View all posts by Brian VanCise →
This entry was posted in martial arts, self defense, personal protection, instin and tagged Arnis, Brazilian Jiujitsu, Brian R. VanCise, Eskrima, Inosanto Kali, Instinctive Response Training, IRT, Kali, KICKBOXING, Kuntao, Kuntaw, Modern Arnis, Personal Protection, Self Defense, Silat. Bookmark the permalink.